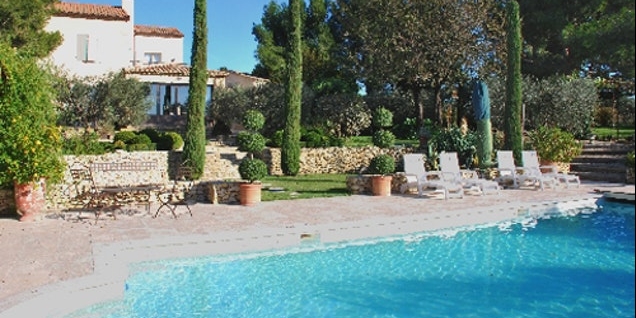 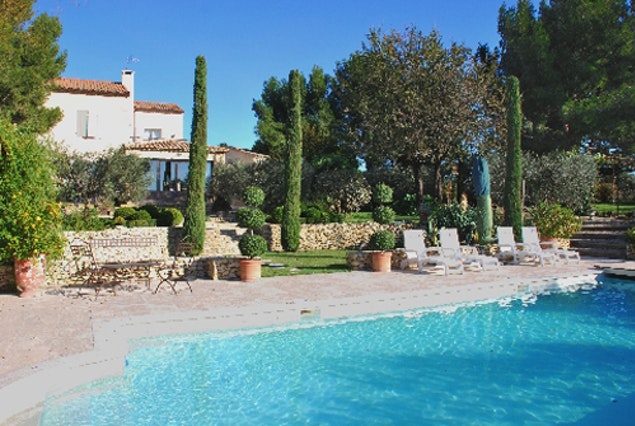 With views of the Les Alpilles, the impressive 8th century Abbaye de Montmajour and Arles in the distance, this charming villa offers a scenic picture of the countryside. Located just outside the village of Fontivieille, this private and secluded villa is still conveniently close to vital establishments.

Surrounded by olive groves, lavender filed and fruit orchards found in the 1.5 hectares huge parcel of land that surrounds the villa, which also includes a kitchen garden and an ornamental pond with fish and a lovely courtyard, this villa is truly a relaxing holiday home. Floodlights can also be found throughout the grounds making the property look even prettier at night.

You access the villa via the ground floor where you find the Entrance Hall. Upon entrance, you’ll be greeted by an eclectic mixture of comfortable modern Provencal and some fine 18th and 19th century French antiques all over the house. Sofa and chairs made from traditional and native materials in the living room, wooden dining table and chairs for 10 people in the dining room, a TV, and modern amenities and appliance in the fully equipped open-plan modern kitchen such as a fridge/freezer, dishwasher, gas cooker range, steam oven and two other ovens. You’ll also find a secondary kitchen and a laundry room nearby.

The living room is bright and cozy. It offers a beautiful view of the garden and beyond. There is also a WC for guests.

The villa has 5 bedrooms and 5 bathrooms and can accommodate up to 10 guests. Two bedrooms are fitted with queen-size beds sharing a bathroom with shower, washbasin and a separate WC.

The Master bedroom is fitted also with a queen-size bed, dressing room, a terrace, and an en suite bathroom with spa bath, shower, washbasin and a WC.

Two other bedrooms with queen-size beds en suite bathrooms can be found in the guest wing of the villa; one with bathtub, shower, and WC. The other one has a shower, basin and a WC. Both these bedrooms have separate entrances.

Outdoor, you have the 10m x 5m heated and covered pool sitting quietly in the lush garden. There is also a terrace to the front of the South facing house and has a Pool house with BBQ, fridge, dishwasher, shower, basin and a WC.

Note: Children are not allowed in this property.

Monaco is a tiny independent city-state on France’s Mediterranean coastline known for its upscale casinos, yacht-lined harbor and prestigious Grand Prix motor race, which runs through Monaco’s streets once a year. Monte-Carlo, its major district, is home to an elegant belle-époque casino complex and ornate Salle Garnier opera house. It also has many luxe hotels, boutiques, nightclubs and restaurants.

Squeezed into just 200 hectares, this principality might be the world’s second-smallest country (the Vatican is smaller), but what it lacks in size it makes up for in attitude. A magnet for high-rollers and hedonists since the early 20th century, it is also famous for its annual Formula 1 Grand Prix, held every year in May since 1929.

Despite its prodigious wealth, Monaco itself is a long way from the prettiest town on the French Riviera: it's basically an ode to concrete and glass, dominated by high-rise hotels and apartment blocks that rise into the hills like ranks of dominos, not to mention an utterly bewildering street layout that seems solely designed to confound lowly pedestrians. It's a rather different story on the rocky outcrop known as Le Rocher, which juts out on the south side of the port and is home to the royal palace, as well as a rather charming little old town which feels a world away from Monte Carlo's skyscrapers and super yachts.