Paris in August - Busy and Deserted

Don't get surprised when you don't see the locals in Paris during the month of August. The city gets completely taken over by people like you and people like me…. Tourists. But Parisians don’t leave Paris because there are too many tourists in August. Keep reading ... 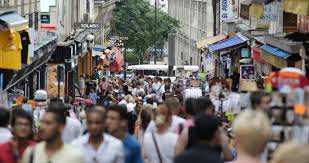 During the month of August, something very strange happens around Paris. It's not unique to the city but it is strange nonetheless. It happens every year like clockwork. It starts and finishes at almost the same time every year. It's been happening for quite a while yet despite this fact, each year, people pretend like it is the first time this has ever happened. Do you have any idea what I'm talking about? No!

Ok, so if you are visiting the city during the month of August, you might notice something a bit unusual . It's not the weather and its not an event. It's about the local people. It seems like there are virtually no local people in Paris at all. The city gets completely taken over by people like you and people like me.... Tourists. That horrible, horrible word that no tourist wants to hear and certainly doesn't want to admit they are. But I personally don't mind the term. If it's used in a nice way of course.

The mass exodus of people, is not something unique to Paris. Most major cities in Europe experience the same thing especially large capitals like Madrid and Rome. All the locals of these cities flee and escape to the beach. But it seems that with each passing year, the concept and understanding of why this happens seems to change. Parisians don't leave Paris because there are too many tourists in August. It's quite the other way around.

Parisians have been doing this long before the massive tourism boom of the 1990s and 21st Century. Any Parisian will tell you this. There is a very famous iconic Parisian movie called Last Weekend, directed by Jean Luck Gordard (if you haven't seen it, you should, it's amazing and still to this day, it's very chic). In this movie, there is a famous scene of a traffic jam which seems to go on and on and on. The scene is a single shot and is over 7 minutes long and highlights the type of jams experienced by Parisians during the 1960s, as everyone tried to go to the south for their summer holidays.

The effect of this, has left the city ripe for the picking, so to speak. Before, the month of August meant that the city was abandoned and dead and now, it is one of the most profitable months for the city. Every hotel is full, every major restaurant that has good reviews is full and the museums are full. This bring a lot of economic life to the city.

Ok, I know there are down sides. It gets a bit crowded, yes it's true. It's a bit more expensive, yes it's true. It lacks a certain authentic element due to the absences of locals, yes it's also true. But it not all bad and it seems like every time August comes around, everyone seems to saying the same thing. All the tourists come so the Parisians leave. No no no, my friend. It was quite the opposite.