In Search of Hip

Find out whats the best flea market to buy clothes for hip style in the fashion capital of the world. Spend a day or at least several hours rummaging through the place to get some really great deals. Take your money out before you get there! 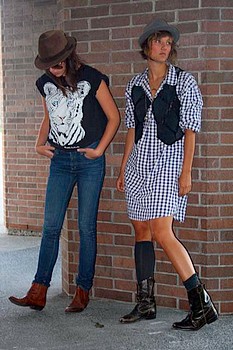 For the last couple of years now, journalists from across the world have trying to define what the word hipster means. In fact, since the origins of the word around 2009, it has slowly come to have quite a negative association with it. I'm not sure why. I've always thought of it as being cool and alternative... But maybe I'm alone in that idea. I'm not sure where the word came from or what it means but I know I like the style. Hippy meets vintage. Urban chic meets Granny's wool sweater  I really like the clothes. Paris didn't strike me as a cool place to get these things.

Ok, OK, I know, it's the fashion capital of the world. But it's a particular type of fashion that Paris is famous for. Like Milan, it's all the high end designer chains that people like me, just can't afford. I know they say that a good Chanel piece never goes out of style. I think that's true, but that's doesn't mean that every age group can wear one. So where can we go?

Well, until last week, I didn't there were much options available but now I realize I was wrong. I thought that it was more of a London or Berlin thing, but it turns out that Paris has quite a cool underground, vintage clothes section as well. You just, maybe, have to look that bit harder to find it. As year goes by, more and more designers are bringing their designs here. Originally a flea market for furniture and house hold stuff  the market is evolving as the demographic of shoppers changes. It is still very much about bric-a-brak stuff but fashion is growing.

For me the best place is a market called St-Ouen. It's not the only market of it's kind but for me, it's the best. It has a great energy to it and has so many different things on offer. It's on every weekend and it claims to be the biggest flea market in the world (although that's a claim, I've heard a lot of markets make) but that's the reason it's great. There are new, and second hand clothes on offer.

You will need to spend the day or at least several hours rummaging through the place to get some really deals but they are there. The stalls selling clothes are always the busiest because they attract the tourist. Massive piece of advice  take your money out before you get there. As a marketplace, no one will take card and you can expect to have quite long lines at the cash machine. If you have some who speaks French, that will be all the better.... nothing says tourist like not being able to speak the language.